The FCA's proposals for improving the Appointed Representatives regime: implications for fund managers

The publication of our article "The regulatory hosting model in the UK: Current challenges and potential developments" in edition 218 of the AIMA Journal proved to be quite timely.

Three days afterwards, on 3 December 2021, HM Treasury published a call for evidence on how market participants use the UK's appointed representatives regime; how effectively the regime works in practice; potential challenges to the safe operation of the regime; and possible future reforms.

On the same day, the FCA published CP21/34: Improving the Appointed Representatives regime.

Both consultations close on 3 March 2022.

The CP does not directly deal with the regulatory hosting/umbrella model for fund management in the UK that is described in the first paragraph of our AIMA journal article (i.e. arrangements involving people at Appointed Representatives (ARs) being seconded to the principal) but it is clear that there is much more to come on this from the both FCA and HMT.

Time to set up an AR arrangement

The main proposal to note is the requirement that a principal notifies the FCA of a proposed AR appointment at least 60 calendar days before the appointment takes effect.

The FCA notes that is "scrutinising firms that intend to appoint ARs more closely at the gateway" and says " We also want to gather more information on principals and their business in relation to ARs, before appointments are made, so that we can, if needed, check whether the appropriate oversight arrangements have been put into place and take any necessary action". Hopefully, the instances of the FCA taking between three and six months (and sometimes up to nine months) to approve new ARs or individuals at ARs will gradually become much rarer once the 60 day timeframe becomes effective.

It used to take a few weeks to get the model in place. This will no longer be the case and this timing will need to be factored into the launch of a new fund/business.

Proposal to explain the rationale for entering into a secondment arrangement

The notification to the FCA of a proposed AR appointment will include the following question:

"Will any individuals from the appointed representative be seconded or contracted to the principal firm to carry on portfolio management / dealing activities? If ’Yes’ please explain the rationale for entering into such an arrangement."

We note that the FCA will also require notification of the additional proposed items of information (including the rationale item described above) in respect of existing ARs as well as those appointed after the proposed rules come into force.

Presumably (hopefully?), this will not cause issues for the regulatory hosting/umbrella model. We think it is another example of the FCA laying the foundations for more developments in this area. 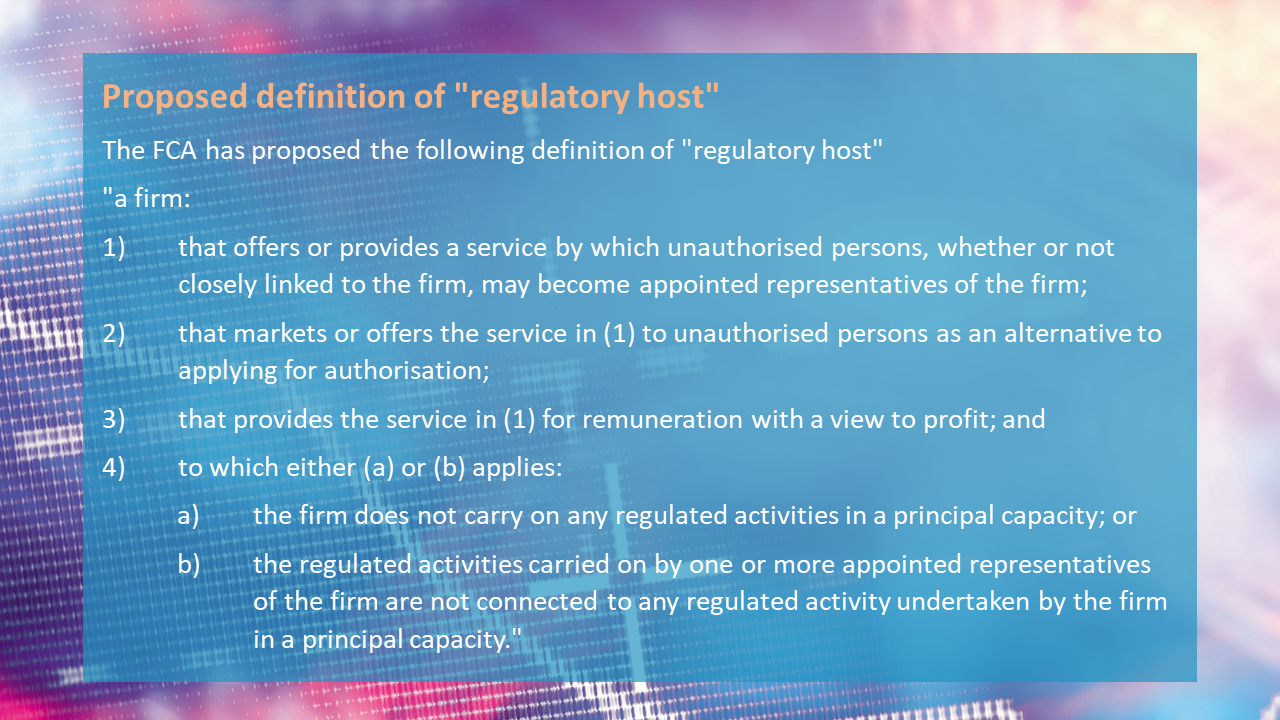 We have a few thoughts about certain aspects of the definition. Are "regulatory incubator" services (which seem to be looked on favourably by the FCA and HMT) caught by (2)? Would the secondment model fall outside (4)?

In any event, this definition will clearly be a starting point and will, perhaps quickly, become highly significant as further rules are introduced in relation to the regulatory hosting/umbrella model. Indeed the FCA states: "…this definition may have wider implications in the future…we invite views on how we should define ‘regulatory hosting’ or what we should consider in doing so" and several of the policy options put forward in Chapter 5 of the CP (discussed further below) depend on this definition.

The FCA invites views on how it should define "regulatory hosting" or what it should consider in doing so.

From this point, (i) when this note refers to the "Investment Management Hosting Model", these are references to arrangements involving people at ARs being seconded to the principal and (ii) when this note refers to "Regulatory Hosting", these are references to the services provided by "regulatory hosts" (using the proposed definition set out above). Obviously, the final definition of "regulatory host" is absolutely key but the initial proposed definition does not refer to secondment arrangements.

Chapter 5 of the CP is a discussion chapter on the risk from Regulatory Hosting, business models where ARs are large in size relative to the principal and principals with overseas ARs[1].

The FCA considers that there is potential harm associated with Regulatory Hosting and sets out the following potential ways to address this harm:

We cannot stress the importance of what the final definition of Regulatory Hosting will be.

Other than the rationale point described above, there are no specific proposals for the Investment Management Hosting Model but the FCA is seeking views on potential harms from the model. Please refer to sections 5.18-5.22 of the CP.

"Q21: Do you consider that the regulatory hosting model in the investment management sector (as described), including the secondment model, works in the best interests of consumers?

Q22: Do you consider that the use of the ‘Host AIFM’ model, including where staff are seconded from principal to AR, is compatible with ensuring good outcomes for consumers and markets?"

HMT's call for evidence is "designed as an information gathering exercise". "The government’s view is that more evidence is required before it can decide whether legislative reform, in addition to the rule changes the FCA proposes to make, is necessary."

The call for evidence does refer to "regulatory hosting" and does use the same or similar language as the CP. Presumably, HMT and FCA proposals will end up addressing Regulatory Hosting.

The call for evidence describes the regulatory host business model as "perhaps furthest removed from the use of ARs originally envisaged when the AR regime was introduced". "It may also raise the most substantial challenges to effective operation of the current regulatory approach". The call for evidence does not discuss the Investment Management Hosting Model or secondment arrangements but let's see what the next paper contains.

We think that it is almost certain that there will be further proposals, potentially involving legislative change, that specifically relate to the Investment Management Hosting Model later in 2022.

[1] The FCA asks:
"Q24: What do you consider are the harms and benefits in smaller principals with larger ARs? …
Q25: Do you consider there are challenges where principals appoint overseas ARs? Are there benefits to appointing overseas ARs?"
[2] " We could, for example, require these principals to have a certain ratio of staff involved in risk management and oversight of the AR in relation to the number of ARs and their size, and / or require them to hold more capital to better align with the potential harm from its ARs."