EOS's egg-shaped lip balm container may be pleasing to the eye, but its EUIPO application to register its 3D shape trade mark failed to impress the Court of Justice of the European Union (CJEU). In a recent ruling, the CJEU refused EOS's appeal against the General Court's decision that the mark was devoid of distinctive character and did not therefore meet the registrability requirements for an EU trade mark.

Background
To recap, back in October 2016, EOS submitted an application to the EUIPO to register its white, egg-shaped 3D trade mark for a range of goods including cosmetics, medicalised lip balm and containers for cosmetics. 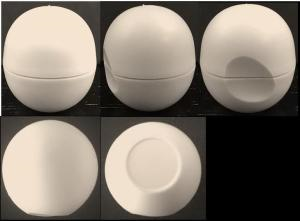 The examiner rejected the application for all of the goods on the basis that the mark lacked distinctiveness. It concluded that the 3D trade mark consisted of the appearance of the product itself or its packaging and did not depart significantly from the shapes of other lip balm packaging that was customary on the market (only a 3D mark, consisting of the appearance of the product itself, which departs significantly from the norm or customs of the sector is regarded as being distinctive, and therefore registrable). A further appeal by EOS to the EUIPO Boards of Appeal also failed.

The matter reached the General Court last year, which similarly held, in September 2021, that the egg-shaped mark applied for was devoid of distinctive character (T-489/20). Most recently, in February this year, the CJEU rejected EOS's request for an annulment of the General Court's decision (C-672/21 P) (not available in English).

The General Court's decision mostly confirmed previous findings. It reiterated the point of law that novelty or originality are not relevant criteria for the assessment of the distinctive character of a mark. It is insufficient that a mark is original – it must be substantially different from other products on the market. In this case, the court found that there were other products in the cosmetic sector that were packaged in a variety of shapes including round or spherical containers.  The General Court also found that EOS's container design, in particular, the flattened base and lines which ring the surface, were similar to the functional shape of the product itself. For these reasons, the shape mark was devoid of distinctive character.

The CJEU ruling is short and criticises EOS for not having explained clearly or precisely the basis for its appeal to the CJEU against the decision by the General Court. The CJEU explained that in accordance with the Statute of the CJEU, an appeal is only allowed where it raises a question of importance for the unity, coherence or development of EU law. EOS had failed to identify the error of law allegedly committed by the General Court and therefore the appeal was not admissible.

Despite the final CJEU ruling turning mainly on the inadequate application submitted by EOS, this case highlights the challenges businesses may face when trying to register less conventional trade marks such as 3D shape marks and when trying to prove that a 3D shape mark is either inherently distinctive or has acquired distinctiveness. Interestingly, this case was decided some months after the General Court's decision in relation to the Guerlain lipstick, where the General Court did find that the Guerlain's shape mark was uncommon for a lipstick and differed from any other shapes existing on the market. Sadly for EOS, it did not experience the same level of success as Guerlain. Nor was the iconic Moon Boot found to be distinctive in a recent General Court ruling.

With thanks to trainee, Kurt Shead, co-author of this article.