Back in July 2020 we blogged on the EUIPO Board of Appeal's decision that Tecnica Group S.p.A. ("Tecnica")'s 3D Moon Boot trade mark was not distinctive - Given the boot – EUIPO Board of Appeal finds 3D Moon Boot trade mark is not distinctive. Tecnica appealed to the General Court and in January this year, the General Court ruled that “the shape of the contested mark corresponds to the common shape of after-ski boots, which generally consist of a high shaft, often in a light synthetic material, with soles and laces.” Therefore, the mark lacked distinctiveness and was not capable of registration for Class 25 goods.

Tecnica is the manufacturer of the Moon Boot, which are popular après-ski boots used to keep feet warm and protected in wintery environments. On 2 August 2011, Tecnica applied to register the following 3D trade mark: 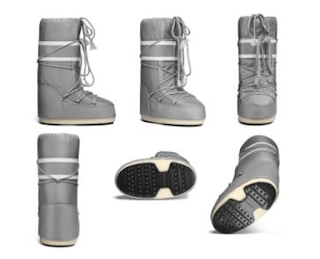 The trade mark was filed in relation to goods within use classes 18, 20 and 25 which contains goods such as clothing, footwear and footwear soles. The application was published in December 2011 and in March 2012, the trade mark was registered.

In May 2017, Zeitneu GmbH ("Zeitneu") filed a request for a declaration of invalidity for all of the above goods, under Article 59(1)(a) and Article 7(1)(b), (c), (d) and (e) of the EUTMR. In March 2019, the Cancellation Division declared the invalidity of the contested trade mark in relation to footwear, footwear soles, insoles, heelpieces for footwear and footwear uppers as under class 25. This was because the Cancellation Division found that the trade mark was not distinctive in relation to goods in class 25, as the "L" shape of the trade mark was typical of boots and there was not enough distinction to individualise the trade mark from other similar products to the relevant public.

Tecnica argued that the relevant public for the goods covered by its trade mark ("footwear; footwear soles; insoles; heelpieces for footwear; footwear uppers") would be consumers who regularly ski and hike and who are concerned with the technical qualities of the goods, and therefore pay high attention to the goods and the marks.  However, the General Court held that the relevant consumers for these goods were the general public in the European Union, and such consumers would have an average level of attention. Considering the established case law regarding the distinctiveness of 3D trade marks, the General Court found that “only a three-dimensional mark, consisting of the appearance of the product itself, which departs significantly from the norm or customs of the sector” shall be regarded as possessing distinctiveness and be, as a result, registrable.

The General Court then looked at whether the overall impression created by this particular 3D shape departs significantly from the norms or customs of the ski footwear sector. The General Court ruled that “the shape of the contested mark corresponds to the common shape of after-ski boots, which generally consist of a high shaft, often in a light synthetic material, with soles and laces.” Therefore the General Court found that the mark lacked distinctiveness and was not capable of registration for the Class 25 goods in question.

The case serves as an interesting reminder of what factors of a design may be taken into account when assessing distinctiveness, and what factors will not be sufficient in ultimately proving a trade mark is distinctive. It also highlights the uphill battle that fashion and accessory designers may face in protecting their designs as trade marks – in some cases a design registration or unregistered design may be a more appropriate form of protection, but the protection will not last as long as a trade mark.