The last laugh for Banksy?

Back in 2020, we commented in The Trade Mark Lawyer about the European Intellectual Property Office (EUIPO)'s cancellation division's decision to invalidate a European Trade Mark (EUTM) registration for one of Banksy's most famous artworks –"Flower Thrower". (Amy Reynolds and Marissa Beatty of Fieldfisher give an overview and comment on Banksy's "flower thrower" trademark - Trademark Lawyer Magazine).

By June 2021, a further 5 of Banksy's trade marks for various artworks had also been declared invalid due to bad faith. (EUIPO takes no monkey business as second Banksy mark is invalidated and Banksy trade mark invalidations now up to a total of six).

Banksy's representative company, Pest Control Office Limited, appealed the invalidity decision in relation to the trade mark known as "Laugh Now" (which features the image of a monkey with a sandwich board). On 25 October 2022, the Fifth Board of Appeal overturned the decision to invalidate the trade mark.

The invalidity actions and subsequent appeal have raised some interesting questions regarding bad faith trade mark applications and the protection of intellectual property rights in artistic works.

Pest Control Office Limited ("Pest Control") was set up to deal with commercial matters relating to the famous street artist known as Banksy. Because Banksy has always sought to maintain anonymity, most business transactions are conducted on his behalf by Pest Control.  Pest Control had registered the following figurative sign as an EUTM under Registration No. 017981629: 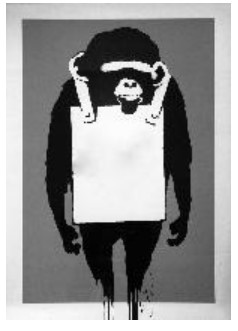 According to the evidence submitted, the artwork was created back in 2002 and was originally commissioned by a Brighton venue, before being sold at auction. As can be seen from the above image, the monkey has a blank sandwich board in the EUTM registration, whereas Banksy’s website and the artwork sold at auction shows the monkey with words on the sign. Banksy makes his artwork available online for free, although he did not give permission for it to be used for commercial purposes.

A third party (Full Colour Black Limited) applied to invalidate the registration on the basis that it had been filed in bad faith under Article 59 of the European Union Trade Mark Regulation 2017/1001 (EUTMR). Full Colour Black Limited is a greetings card company which produces cards and other merchandise featuring Banksy's artwork, and these activities are without permission or licence from Banksy.

The question of bad faith is subjective and based on the applicant’s intentions when the EUTM application was filed (in this case in 2018). For a finding of bad faith there must be (a) an action by the trade mark owner which reflects a dishonest intention, and (b) an objective standard against which this action can be measured. Bad faith may occur if the trade mark owner never had an intention to use the sign as a trade mark.

Full Colour Black raised a number of the same arguments that it had successfully relied upon in the earlier Flower Thrower case. These included:

The Cancellation Division decided that there was bad faith on the part of Banksy at the time of applying to register the EUTM under Article 59(1)(b) EUTMR. The applicant for a mark must be subjectively determined to have acted in a way which reflects a dishonest intention and judged against an objective bad faith standard. In this case, the Cancellation Division noted that Banksy had himself confirmed publicly that he did not produce any goods. He then went on to open his shop and online store, publicly stating that this was for the main purpose of trying to defend Full Colour Black’s invalidity application. These actions amounted to sham efforts to try to show an intent to use the trade mark and were deemed bad faith on the part of Banksy at the time of filing. As a result, the EUTM registration was declared invalid.

The Cancellation Division did acknowledge the challenges faced by Banksy in relation to asserting copyright against third parties while at the same time keeping his identity a secret. The Cancellation Division chose not to comment further on whether famous works of art are also registrable as trade marks, but did note that copyright and trade mark protection do not have to be mutually exclusive.

The decision to cancel the trade mark was overturned by the Fifth Board of Appeal. The Board was of the view that Banksy's anonymity does not automatically give rise to bad faith, and nor does his choice to protect his artwork by trade mark registration (instead of relying on copyright). The Board found that the Cancellation Division made errors in its consideration of some of the evidence, including failing to recognise that Banksy's statement that “copyright is for losers” was made ironically.

The Board acknowledged that it was possible for the same mark to be protected by copyright and by trade mark registration. The fact that there are certain difficulties or limitations with copyright protection does not mean that an IP owner's decision to apply for a trade mark for the same piece of artwork is abusive.

The cancellation action was filed less than six months into the five year grace period which runs from the registration of a trade mark (and which is still running today). The fact that there had been little or no use to date does not create a presumption that there was no intention to use the trade mark at the time of filing.

The Board's decision potentially allows artists (and their successors) to hold onto rights in their creative work indefinitely (i.e. beyond the term of copyright protection which ends 70 years after the death of the artist) through trade mark registration. There are currently many copyright protected works which are also registered as trade marks. Artists will be relieved that this decision allows them to continue to protect their works in this way.

While Banksy's "copyright is for losers" dictum has not nullified the artist's eligibility for copyright or trade mark protection, the decision does raise a number of interesting questions about the legitimacy of affording copyright protection to street art and the artists who create it. In the original decision, the Cancellation Division acknowledged that such questions fall outside of the scope of the invalidity proceedings.

Do creators of “street graffiti” forfeit copyright protection, because rights should not subsist in work that has been created as part of a potentially criminal act? Even where their work is being commercially exploited by third parties without permission, it is unlikely that street artists will pursue copyright infringement claims while the risk of criminal damage charges loom over them. Is it right that companies should be able to exploit this dilemma by commercialising work, which in most cases was never intended to be commercialised?

Overall, this decision is very positive for those in the creative and artistic industries. But, does Banksy have the last laugh? Not necessarily. The Board of Appeal's decision may itself be subject to an appeal before the General Court. Judgments of the General Court may be appealed to the Court of Justice of the European Union. So this may not be the last that we have seen of this case.

In addition, Banksy has not appealed the decisions to invalidate his other trade marks and so new applications will need to be filed in order to renew the trade mark protection. In the case of the Flower Thrower trade mark, it is worth noting that the facts are a little different and the five year grace period had already expired when the cancellation action was filed. This would have made it more difficult for Banksy to argue that he did have an intention to use the mark at the time that it was filed. It is therefore possible that the Flower Thrower case would have had a different outcome had it been appealed.