The decision raised some interesting questions regarding bad faith trade mark applications and the protection of intellectual property rights in artistic works.

In May 2021, the EUIPO's cancellation division struck again (Cancellation No. 39 873 C (INVALIDITY)), this time deciding to invalidate Banksy's trade mark registration for the image of a monkey wearing a sandwich board. In both cases the invalidity action was filed by Full Colour Black Limited (Full Colour Black), a greetings card company specialising in street art images.

Via Pest Control Office Limited, Banksy had registered the following figurative sign named "Laugh Now" as an EUTM under Registration No. 17981629: 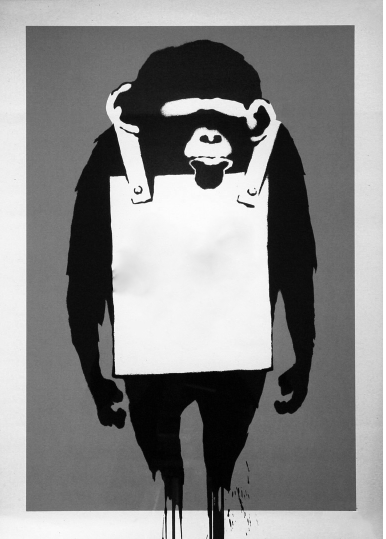 According to the evidence submitted, the artwork was created back in 2002 and was originally commissioned by a Brighton venue, before being sold at auction. As can be seen from the above image, the monkey has a blank sandwich board in the EUTM registration, whereas Banksy’s website and the artwork sold at auction shows the monkey with words on the sign.

Full Colour Black applied to invalidate the registration on the basis that it had been filed in bad faith under Article 59 of the European Union Trade Mark Regulation 2017/1001 (EUTMR).

Full Colour Black raised a number of the same arguments that it had successfully relied upon in the earlier Flower Thrower case. These included:

The Cancellation Division decided that there was bad faith on the part of Banksy at the time of applying to register the EUTM under Article 59(1)(b) EUTMR. The applicant for a mark must be subjectively determined to have acted in a way which reflects a dishonest intention and judged against an objective bad faith standard. In this case, the Cancellation Division noted that Banksy had himself confirmed publicly that he did not produce any goods. He then went on to open his shop and online store, publicly stating that this was for the main purpose of trying to defend Full Colour Black’s invalidity application. These actions amounted to sham efforts to try to show an intent to use the trade mark and were deemed bad faith on the part of Banksy at the time of filing. As a result, the EUTM registration was declared invalid.

The Cancellation Division did acknowledge the challenges faced by Banksy in relation to asserting copyright against third parties while at the same time keeping his identity a secret. The Cancellation Division chose not to comment further on whether famous works of art are also registrable as trade marks, but did note that copyright and trade mark protection do not have to be mutually exclusive.

A search of the EUTM Register confirms that five other trade mark registrations owned by Pest Control Office Limited are subject to cancellation actions by Full Colour Black Limited, so it will be fascinating to see whether the same approach is adopted by the Cancellation Division in each of these cases.

A couple of points to note in particular: