The draft regulations (known as The Agricultural Products, Food and Drink (Amendment etc) (EU Exit) Regulations 2020 (Draft) (the "Draft Regulations")) consolidate and revoke various statutory instruments which had dealt with different aspects of the protection of GIs so far.

A GI is a sign used on goods which have a specific geographic origin and possess specific qualities or a reputation due to that origin for example Darjeeling, Stilton and Cognac. This means that a product cannot be sold as "Scotch whisky" for example, unless it is produced in a certain way in Scotland. Well known British GIs, such as Scotch whisky, Welsh lamb or Cornish clotted cream, are highly valued by British producers and accordingly to the government's press release, "represent around a quarter of UK food and drink exports by value, approaching £6bn in export value in 2019."

As we've known for some time the UK will create its own GI scheme following the end of the transition period. The Draft Regulations and accompanying guidance from the Department for Environment, Food & Rural Affairs (DEFRA) now provide us with the details.

The new scheme will be managed by DEFRA and will protect food, drink and agricultural products (including beer / cider), spirits and wine. It will use the following designations: protected designation of origin (PDO), protected geographical indication (PGI) and traditional speciality guaranteed (TSG).

The Draft Regulations confirm that any existing UK products registered under the EU's GI schemes at the end of the transition period will continue to be protected under the UK GI scheme. In addition, any registered GIs from anywhere on the island of Ireland will continue to be fully protected in the UK and EU, such as Irish Whiskey or Irish Cream.

Therefore, from 1 January 2021, producers will need to apply to:

DEFRA has advised that it will publish guidance in due course about how to apply for protection. However, we do know that the relevant logos have been released as shown below. Producers will have until 1 January 2024 to change their packaging and materials to display the new logos. 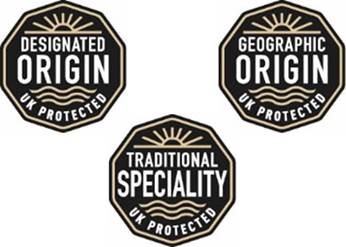 Continued protection in the EU and elsewhere

Finally, all UK GIs registered under EU GI scheme before the end of the transition period will remain protected in the EU.