In Lego A/S (Lego) v EUIPO (Case T-515/19) the General Court annulled a decision of the EUIPO Third Board of Appeal (BoA) that the below Community Design for “building blocks for a toy building set" was invalid. In doing so, the General Court decided that the BoA had not properly considered the exception for modular system designs and failed to properly assess all features of the design under Article 8(1) of Regulation No 6/2002. 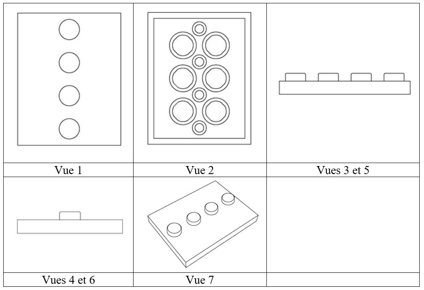 The above design was registered on 2 February 2010 as a Community Design. In December 2016 Delta Sport Handelskontor GmbH (Delta) filed an invalidity action under Article 8(1) of Regulation No 6/2002 on Community Designs. Article 8(1) provides that 'A Community design shall not subsist in features of appearance of a product which are solely dictated by its technical function'. Article 8(2) adds further to Article 8(1), and specifies that interconnecting products cannot be protected - 'a Community design cannot subsist in features of appearance of a product which must necessarily be reproduced in their exact form and dimensions in order to permit the product in which the design is incorporated or to which it is applied to be mechanically connected to or placed in, around or against another product so that either product may perform its function'.

Delta submitted that all the features of the product's appearance were solely dictated by its technical function and should not therefore be registered. The EUIPO Cancellation Division rejected the invalidity action filed by Delta but on further appeal, the BoA reversed the decision and declared the design invalid, finding that all the features of the design were solely dictated by technical function. Lego appealed the decision to the General Court.

As part of Lego's appeal to the General Court, it submitted that the design fell within the exception under Article 8(3) of Regulation No.6/2002 which provides that:

3. Notwithstanding paragraph 2, a Community design shall under the conditions set out in Articles 5 and 6 subsist in a design serving the purpose of allowing the multiple assembly or connection of mutually interchangeable products within a modular system.

(N.B. Articles 5 and 6 set out the requirements for protection for a Community design, i.e., novelty and individual character).

The General Court did not believe that the reliance on Article 8(3) was out of time. It stated that neither Regulation 6/2002 nor the rules of procedure of the Board of Appeal specified when Article 8(3) could be relied upon in proceedings.

The General Court considered the relationship between Article 8(1) and 8(2) of the Community designs Regulation. It acknowledged that designs could fall within both Article 8(1) and 8(2), as a design may be solely dictated by the technical function of interconnection. However, designs falling under Article 8(2) may not necessarily be dictated solely by technical function e.g. if there were some visual considerations in the design process. In situations where there is an overlap between Articles 8(1) and 8(2), the General Court considered that the BoA approach was too restrictive in not considering the possibility of being able to rely on the Article 8(3) for modular designs. The BoA considered that a narrow interpretation would contradict Recital 11 of Regulation No.6/2002 which seeks to ensure that mechanical fittings of modular products should be protectable. The General Court therefore held that it was possible to rely on the Art 8(3) defence even if the applicant for a declaration of invalidity had only relied on Art 8(1). Thus Art 8(3) can be a defence to both Art 8(1) and Art 8(2) in certain circumstances.

Lego submitted that the BoA had failed to properly consider all of the features of the appearance of the design, namely the smooth surface on either side of the row of four studs on the upper side, which were not solely dictated by the technical function of the brick. The General Court referred to DOCERAM GmbH v CeramTec GmbH (Case C-395/16) which states that for a design to be refused under Art 8(1), all features must be dictated by the technical function. Having reviewed the decision by the BoA, it had failed to consider the smooth surface even though Lego had not relied upon this directly at the BoA. It was considered that an incomplete assessment of the features of the design was completed by the BoA and that a smooth surface could be considered a creative aspect of a design.

The decision means that interconnection designs may not be considered to be solely dictated by a technical function and that such a design could be protectable in situations where it satisfies the defence for interconnected modular products.

This decision potentially expands the scope of modular designs that could be protectable, which previously may have been invalid where the design was considered to be solely dictated by technical function.