Increased focus on the concept of "Beneficial ownership": forewarned is forearmed!

Danish cases: what's in a name?

The Danish cases concerned Danish companies claiming withholding tax exemptions ("WHT"- under the EU Parent-Subsidiary Directive – "PSD" – and the Interest and Royalties Directive – "IRD"– ) on dividend and interest paid out to EU parent companies (i.e. Luxembourg, Cyprus and Sweden) that, in turn, were (partially) passing on these payments to non-EU companies or private equity funds. The relevant circumstances can be illustrated as follows: 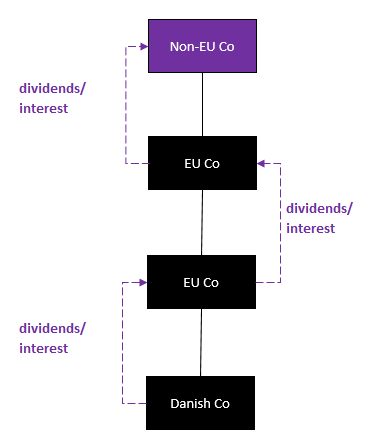 In these cases, the Danish Tax Authorities denied the WHT exemptions on payments made by the Danish companies as the EU parent companies were allegedly not the "beneficial owners" of the payments. These cases were brought before the CJEU that sustained the tax authorities' interpretation. Indeed, the Court took a broad approach (a "substance over form" approach, in line with the OECD's) to interpret the notion of "beneficial owner" (e.g. ability to effectively use and enjoy incomes received; or economic "substance") and judged that a lack of "beneficial ownership" is an indicator of "abuse of rights".

Furthermore, the Court confirmed that it was possible to deny a WHT exemption based on a Directive, notwithstanding the absence of a domestic specific or general anti-abuse rule (no such rule was in force in the context of the Danish cases).

From Denmark to the World: international case law

Following the Danish cases, the focus on the concept of "beneficial ownership" has substantially increased.

In these judgments, the local Jurisdictions seem to adopt the CJEU's economical approach of the concept of "beneficial ownership", which is invoked by the local tax authorities to refuse WHT exemptions claimed by taxpayers.

However, the Italian Supreme Court rendered a judgment in favour of the taxpayer. This case concerned interests paid out by an Italian company to a Luxembourg holding company (with limited "substance" – "LuxCo") having also a financing function. As LuxCo was systematically paying these interest on to a second holding company (less a spread of 0.125%), the Italian Tax Authorities rejected the WHT exemption of such interest payments as it considered that LuxCo was not their "beneficial owner". Conversely, the Court ruled against the Italian Tax Authorities. According to the Court, although its "light" substance (which was considered as appropriate for a holding company), LuxCo beneficially owns interest received as it is effectively acting as an independent (fee-use of interest received) finance company (remunerated with a market spread) within the group.

Indeed, we have noticed that the Authorities are increasingly using this concept in the framework of tax audits relating to Belgian WHT exemptions on interest, dividend and royalties paid out to foreign related parties.

Additionally, the Belgian Tax Authorities are gearing up on this matter as they have set up a special team with a particular focus on anti-abuse rules originated from international law such as the concept of "beneficial owner".

On top of this, the Belgian Tax Authorities seem to adopt a more economic approach ("substance over form") when assessing the existence of "tax abuse" during tax audits. Undoubtedly, this tendency has been influenced by the CJEU's Danish cases. A recent judgement of the Court of Appeal of Ghent confirms this tendency.

Back to Belgium: towards the adoption of a "substance over form" approach?

On 1 December 2020, the Court of Appeal of Ghent rendered a judgement in which it applies the Danish cases' reasoning.

This judgment covers a period (between 2006 and 2012) before the entry into force of the Belgian general anti-abuse rule ("GAAR") or the domestic implementation of the PSD's special anti-abuse rule ("SAAR"). In particular, this case concerns a series of legal steps following the acquisition of a Belgian group (i.e. contribution of shares, merger, shares transfer, debt reallocation, incorporation of companies), which ended with a dividend and (capital reductions) paid out by a Belgian to a Luxembourg holding ("HoldCo"), for which a WHT exemption was claimed (i.e. domestic implementation of the PSD).

The Belgian Tax Authorities challenged this WHT exemption on the basis of the new GAAR. However, the Court of Appeal of Ghent considered (rightfully) that the GAAR was not applicable and decided to apply the principles laid down by the Danish cases (i.e. the general principle of "abuse of rights"). Despite multiple business motives invoked by the taxpayer to justify the legal steps carried out, the Court considered that the tax motives were predominant. Its judgment was heavily influenced by HoldCo's lack of "substance", lack of effective activity as well as lack of "beneficial ownership". Although not grounded on any applicable domestic legal basis (new GAAR and SAAR were not applicable), the Court considered that these steps constitute an "abuse" as their sole aim is to benefit from the WHT exemption. The Court thus followed the Danish cases' reasoning.

The Belgian Tax Authorities' increased scrutiny of "beneficial ownership" structures as well as their recently adopted "substance over form" approach are likely to toughen up the discussions around WHT exemptions. Additionally, in recent audits, we have seen the Belgian Tax Authorities using a "substance over form" approach to circumvent legal hurdles. For the sake of legal certainty, we hope that this tendency will not generalize.

In any case, multinational groups (to be) involved in material cross-border dividend, interest or royalty payments should assess whether their current structure would pass the "abuse of rights" and the "beneficial ownership" tests or take into account the outcome of these recent developments in their future transactions.

In case of questions, please do not hesitate to reach out to Geoffroy Galéa and Alain Thilmany.