Louis Vuitton's chequerboard "Damier Azur" trade mark was registered with the European Union Intellectual Property Office ("EUIPO") back in 2008, but was the subject of a successful invalidity action in 2015. After Louis Vuitton's appeal was unsuccessful at the Second Board of Appeal, the General Court has now issued their decision in Louis Vuitton Malletier v EUIPO on further appeal holding that the Second Board of Appeal's decision is annulled, and so the chequerboard trade mark remains registered (for now).

In November 2008, Louis Vuitton Malletier ("Louis Vuitton") obtained a WIPO international registration designating the EU for their Damier Azur trade mark within class 18, which contains goods such as handbags, backpacks and purses. This specific trade mark is for their popular chequerboard pattern in a beige and blue variation: 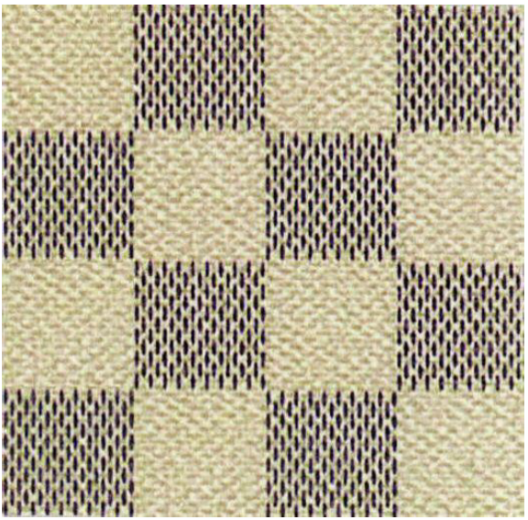 However, in 2015 an individual named Mr Norbert Wisniewski (the "Applicant") filed an application for the EUTM to be declared invalid under Article 59(1)(a) and Article 7(1)(b), (c) and (e) of the EUTMR.

In December 2016, The Cancellation Division upheld the application for declaration of invalidity in respect of all the goods covered by the international registration, stating that there was no need to examine the absolute grounds for refusal. Louis Vuitton filed an appeal with the EUIPO Second Board of Appeal ("Board of Appeal") and in November 2018 the appeal was dismissed. The case then went to the General Court and the decision has now been issued. It is worth noting that prior to this, the General Court has found on two occasions that Louis Vuitton's chequerboard pattern in different colours had not acquired a distinctive character in all of the EU Member States.

Pleas made by Louis Vuitton

Louis Vuitton alleged that the Board of Appeal incorrectly assessed inherent distinctive character for two reasons - the decision was contrary to the rules concerning burden of proof in invalidity proceedings and the decision was against the principle of equality of arms, the right to a fair trial and the right of defence.

Louis Vuitton argued that when an EU trade mark is subject to a declaration of invalidity, it enjoys a presumption of validity and therefore the burden of proof lies with the applicant for the declaration to provide strong evidence of invalidity. Therefore, the Board of Appeal would have had to look at the evidence provided by both parties and not carry out a fresh assessment of validity.

Louis Vuitton argued that the Applicant provided sparse and inadequate evidence, and therefore the Board of Appeal compensated for this by basing its decision on allegedly well-known facts, which Louis Vuitton argued were not established facts. The well-known fact in question was that the trade mark was "a basic and commonplace figurative pattern… which did not depart significantly from the norms and customs of the sector".

In establishing whether this was a well-known fact, the General Court reiterated that "well-known facts are defined as facts that are likely to be known by anyone or may be learnt from generally accessible sources". The Board of Appeal would not need to look at the accuracy of these facts, however an applicant may provide evidence proving the accuracy or inaccuracy of a matter of common knowledge.

Therefore, the Board of Appeal was right to find the trade mark as being a basic and commonplace pattern that did not depart significantly from the norms or customs of the sector, and no evidence had been given by Louis Vuitton to contest the accuracy of this well-known fact. In addition, the Board of Appeal did not infringe the rules on the burden of proof. As a result, the first plea was rejected entirely.

The General Court noted that Louis Vuitton had filed extensive evidence before the Board of Appeal, and the evidence was meant to be taken as a whole to demonstrate acquired distinctiveness throughout the entire EU. Further, the Cancellation Division had made errors in the assessment of the evidence in their original findings. In their assessment, the Board of Appeal divided the Member States into three groups, but limited their assessment to only the third group (including Bulgaria, Estonia, Latvia, Lithuania, Malta, Slovenia and Slovakia) which represents only 4% of the EU population. Additionally, the Board of Appeal limited itself to only assessing certain pieces of evidence relating to this group, without explaining the reasons why it considered all the other evidence irrelevant (the Board of Appeal limited itself to analysing some of the evidence contained in only 8 out of the 68 exhibits). Following this assessment, the Board of appeal concluded that the mark at issue had not acquired distinctive character through use.

The General Court did not comment on whether it thought the evidence submitted was sufficient to show acquired distinctiveness but did say "some of the evidence in the exhibits which the Board of Appeal did not take into account in the contested decision was potentially relevant for the purposes of assessing whether the mark at issue had acquired distinctive character through use… for example, the Board of Appeal did not analyse any of the evidence in the first group of exhibits, which… were intended to demonstrate that it was one of the most well-known luxury goods businesses… It is clear from exhibit No 4, for example, that between the years 2008 and 2014, the applicant was the top seller of bags and travelling bags (goods in class 18) in western Europe and the second top seller in eastern Europe". The General Court also noted some other crucial evidence which was not considered by the Board of Appeal, including evidence which demonstrates the extensive, geographically widespread and long-standing use of the mark at issue in the EU and the substantial investment made in promoting the mark; extracts from catalogues, brochures and advertisements; search engine and website results etc.

As a result, the General Court found that the Board of Appeal failed to comply with Article 59(2) EUTMR.

The registration remains valid for now, and the EUIPO could appeal the decision to the Court of Justice which is the highest court in the EU. If not, the case should be remitted back to the Board of Appeal for further review.

The decision highlights the challenges facing owners of trade marks which consist of fairly basic or commonplace patterns – there is a high risk that such marks will be considered to lack inherent distinctiveness. It is usually necessary to demonstrate acquired distinctiveness through use in order to achieve (and maintain) a registration of this type.

With special thanks to Minhaal Datoo, trainee solicitor, for his contribution to this article.

A phased return to work is taking place in different sectors.  Fieldfisher is committed to supporting you through the transition and beyond.  We continue to be available to our clients either remotely or in person, with your business as usual matters, as well as for C-19 support. Please review our Covid-19 hub for updates and get in touch if you require further information.