Tecnica Group S.p.A. ("Tecnica") is the manufacturer of the Moon Boot, which are popular après-ski boots used to keep feet warm and protected in wintery environments. On 2 August 2011, Tecnica applied to register the following 3D trade mark: 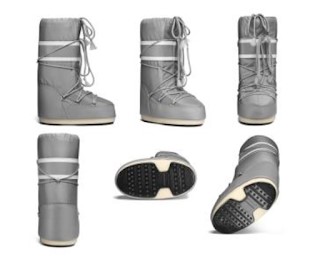 The trade mark was filed in relation to goods within use classes 18, 20 and 25 which contains goods such as clothing, footwear and footwear soles. The application was published in December 2011 and in March 2012, the trade mark was registered.

In May 2017, Zeitneu GmbH ("Zeitneu") filed a request for a declaration of invalidity for all of the above goods, under Article 59(1)(a) and Article 7(1)(b), (c), (d) and (e) of the EUTMR. In March 2019, the Cancellation Division declared the invalidity of the contested trade mark in relation to footwear, footwear soles, insoles, heelpieces for footwear and footwear uppers as under class 25. This was because the Cancellation Division found that the trade mark was not distinctive in relation to goods in class 25, as the "L" shape of the trade mark was typical of boots and there was not enough distinction to individualise the trade mark from other similar products to the relevant public.

In May 2019, Tecnica filed an appeal against this decision and Zeitneu requested the appeal be dismissed. The appeal went to the EUIPO First Board of Appeal ("Board of Appeal") for further review. The Board of Appeal's key findings were as follows.

Board of Appeal decision

The trade mark is not distinctive

Originality does not necessarily equal distinctiveness

To support their appeal, Tecnica referred to several features of their trade mark that were original such as parts of the design, structure and the lacing of the boot. The Board of Appeal did note that while the boot does have some original aesthetic and design features as a product, this was not enough to make it distinctive compared to other après-ski boots as these were purely functional or decorative. On this topic, the Board of Appeal held that the fashion market is "a market of design products, characterized by the originality of the shapes of the products or their decorative elements, which are appreciated for their originality and aesthetic beauty but which do not normally fulfil the function of indicating the commercial origin of the products themselves". Therefore, while features of such products may be original in design and decoration, this does not always give a trade mark distinctiveness.

After considering the evidence and arguments submitted by each party, the Board of Appeal ultimately upheld the decision of the Cancellation Division and confirmed the cancellation of Tecnica's trade mark.

The case serves as an interesting reminder of the differences between originality and distinctiveness, what factors of a design may be taken into account when assessing distinctiveness, and what factors will not be sufficient in ultimately proving that a trade mark is distinctive. It also highlights the difficulty that fashion and accessory designers may face in protecting their designs as trade marks – in some cases a design registration or unregistered design may be a more appropriate form of protection, but the protection will not last as long as a trade mark.

It is also worth considering whether a design such as the Moon Boot would be able to rely on copyright protection, in light of last year's CJEU ruling in Cofemel and more recently, in Brompton Bicycle. These cases have potentially broadened the scope of copyright protection in designs. The CJEU rulings have confirmed that 3D designs, even if partly functional, can still attract copyright protection provided they are original in the sense that the author "has expressed his creative ability in an original manner by making free and creative choices and has designed the product in such a way that it reflects his personality" (see our blog here – "CJEU gets a handle on whether copyright subsists in Brompton bicycle….". There is a possibility that the Moon Boot could fulfil that criteria, but it would ultimately be for the relevant national court to decide on the particular facts of the case.

With special thanks to Minhaal Datoo, trainee solicitor, for his contribution to this article.