During the early days of the COVID-19 lockdown there were frequent pop culture comparisons of London's startlingly eerie empty streets with those shown at the start of the film, 28 Days Later.

However, as the City of London gradually, and happily, returns to its pre-pandemic levels of animation, is there still an existential threat to the financial markets it plays host to?

In that, and while the very real human tragedy of the pandemic brooked no comparison with a zombie movie, I hope you might allow me a sense of theatrical escapism in the case of LIBOR's demise. 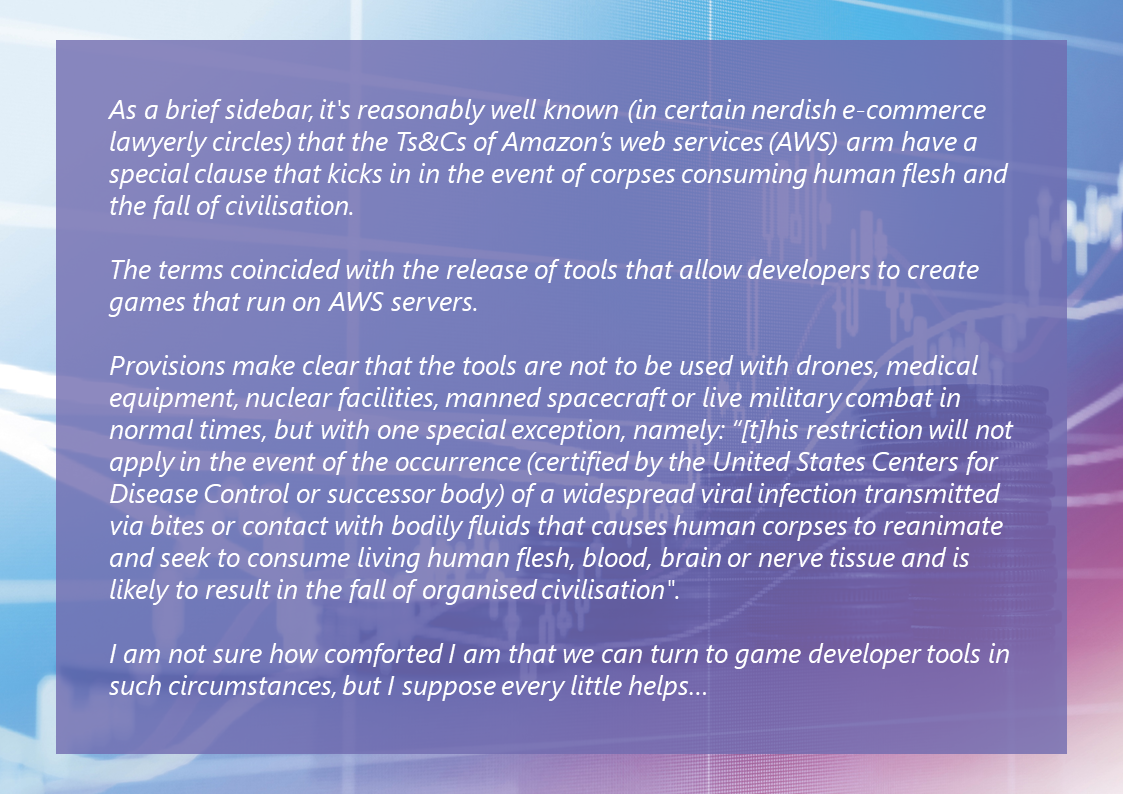 For those of us often consumed by all-things LIBOR, there has, since 2017, been another impending threat from the (if not ravenous) undead: zombie LIBOR.

With the maligned benchmark rate due to be laid to rest at the end of this year, there have, in the years since the FCA sounded the death knell, been various machinations directed at reanimating it in some way after voluntary (panel) rate submissions cease. Regulators and some market participants frequently expressed alarm at the thought that efforts to expunge one unrepresentative rate, might herald the arrival of one even more divorced from reality.

Much of the clamour for reviving LIBOR was driven by sectors such as trade finance (and to a lesser degree the loan markets) with their structural problems with alternative backward-looking compounded risk-free rates. However the need, such as it is (or was), was thought to be two-fold – a continuation of a term rate that would work for new contracts and instruments as well as a rate that would allow existing ("legacy") LIBOR contracts to avoid a calamitous cliff-edge when mandatory panel rate submissions ended.

Under newly-forged regulatory powers and proposed legislation, the UK Financial Conduct Authority finally announced in late summer that it would create a form of synthetic LIBOR in an effort to reduce disruption to markets in relation to any critical benchmark that ceases to be published or that is designated as no longer representative of the reality it seeks to measure.

Under the proposals, the FCA would direct LIBOR's administrator to continue to publish 1, 3 and 6-month Sterling and Yen LIBOR under a changed calculation methodology so that the relevant settings may continue to be used for certain financial contracts and instruments. On 16 November 2021 the FCA published a series of market notices, effectively rubberstamping those proposals following the conclusion of the consultation and stakeholder feedback (with only minor changed to the Yen methodology).

(US Dollar LIBOR's partial reprieve takes it outside the scope of this article, however readers should be aware that US legislators have proposed their own intervention for the continuing use of US Dollar LIBOR in contracts. The FCA continues to stress that it will restrict the use of US Dollar LIBOR by supervised entities from the end of this year under the UK benchmarks regulations.)

Zombie LIBOR (or perhaps less dramatically, "synthetic" LIBOR) is something of a derived rate: where, in the absence of panel submissions, numbers are contrived from methodologies hopefully more than one-step removed from "finger in the air" guestimates. That is, it takes as its baseline a forward-looking term risk-free-rate (RFR) to which is added a fixed spread adjustment for the relevant tenor, taking into account the historic difference between the underlying RFR and LIBOR. While the proposed calculation methodology is relatively complex the FCA believes that it is a reasonable and fair approximation of what the relevant LIBOR setting might have been had it not been discontinued.

There is then an argument that the fear of an unrepresentative benchmark, lurching onwards beyond 2021 has passed, because the FCA's synthetic rate does not seek to breathe life back into the body of LIBOR. Nor is it a spectral form, based on historic numbers. But can market participants re-emerge, safe in the knowledge that danger has passed? Not quite.

Crucially synthetic LIBOR will no longer be representative for the purposes of the UK benchmark regulations. It is not for use in new contracts. It is a legacy solution and despite the wider-than anticipated permitted use cases, the FCA continues to discourage the use of the non-representative synthetic LIBOR settings where appropriate alternatives are available.

So how does synthetic LIBOR help the loan markets?

The FCA's intervention is focused on minimising disruption and dispute by enabling legacy references to LIBOR to be interpreted as references to synthetic LIBOR (for so long as such rate is available), including provisions that seek to avoid any argument that the change is nevertheless fundamental enough to have altered the parties' initial contractual bargain.

Importantly as far as cessation triggers, contractual fall-backs and rate replacement waterfalls are concerned the draft legislation supporting the proposals enables parties to contract out of the interpretation 'override' effect. It is not entirely clear how this might operate, depending on the particular terms of a contractual mechanism for alternative or replacement rates.

Significantly in an attempt to address the absence of LIBOR transition language, the override may yet cut across negotiated fallbacks and cessation triggers. If parties do not want synthetic LIBOR to apply, they may need to re-visit the fallback provisions in their loan documents to avoid the legislation overriding their contractual intentions and applying a synthetic LIBOR rather than another alternative.

Early suggestions that synthetic LIBOR would only be permitted for certain categories of "tough legacy" contracts, (where the transition to risk-free rates would be difficult) have not materialised and in that context the proposals are certainly a welcome addition to the toolkit for dealing with LIBOR transition, particularly for a broader range of contracts referencing Sterling (and Japanese Yen).

However the FCA, other global regulators and working groups continue to stress the need for active transition and structural change in the loan markets. And for those parties who have the capacity and wherewithal to provide for alternative rates, while they may no longer fear zombies they may yet need to wield the pen in the fight against synthetic LIBOR.