Barking memorial unveiled in memory of those affected by mesothelioma

Shaheen Mosquera
Shaheen Mosquera and Peter Williams joined their client Peter Auger at a ceremony in Barking on April 28 unveiling a memorial to those who lost their lives following exposure to asbestos.

Barking in east London was home to the notorious Cape asbestos factory that closed in 1968. Between 1981 and 2005, however, 187 men in Barking died from mesothelioma, making it the worst area of London for asbestos-related disease and in the UK top 10. The town also has the highest rate of mesothelioma deaths for women in the UK, with 60 women dying from the disease between 1981 and 2005.

The asbestos team has represented Barking residents affected by asbestos cancer for more than 30 years. Too many have seen their neighbours, relatives and friends suffer the terrible diseases caused by exposure to the fatal dust, not only while working at the factory but also simply by living in the area contaminated by dust escaping from the factory. 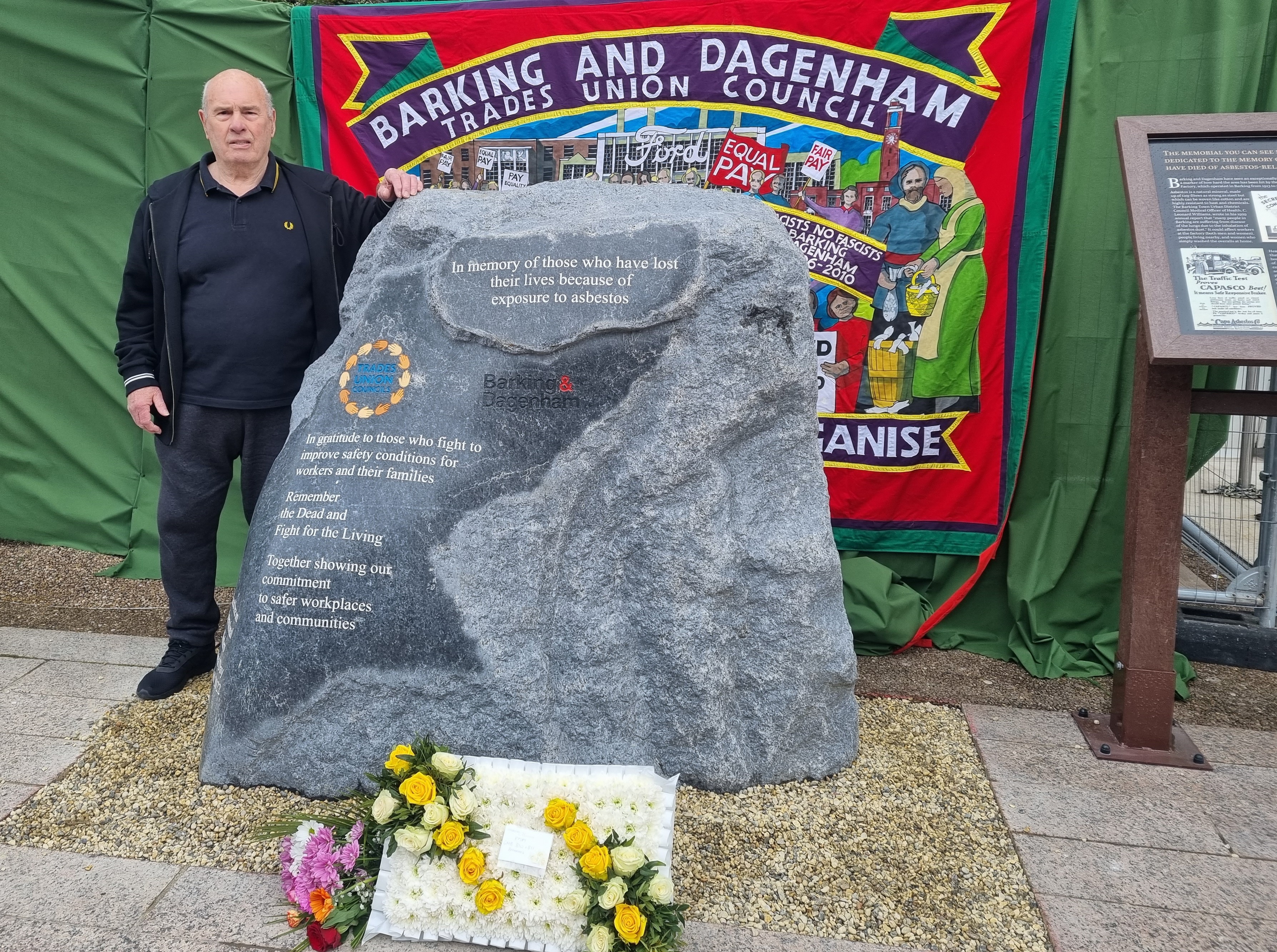 Mr Auger (pictured) worked as a lagger at the factory where he started as an apprentice aged 17. He was taught to put asbestos on pipes and boilers. His overalls were always smothered in asbestos and he was never warned of the danger nor given protective equipment.

He told the local paper: "I feel angry. Firms haven't looked after me and treated me with disrespect really.
"I only wanted to earn a living, I've earnt them money and the thanks they give you is one of them has given me asbestosis."

At the Barking factory, he recalls watching women making asbestos mats for pipe valves during downtime.
"They were making these mats with blue asbestos. They had extractor fans above their head and everything else but they never wore a mask.

"When they used to make a mat, they would have this clump of wood and they would bang it into shape.The outside was asbestos cloth, inside was blue asbestos.

"I used to sit there like an idiot watching them doing it. No-one told me it might kill me one day."

Peter, who has been married for 60 years and has two children, said he had no idea how dangerous it was at the time. He now goes to funerals of laggers around once a month, adding that they are dying "left, right and centre".

Shaheen said she had another client a few years ago, born and bred in Barking, who went to work as a foreman in the Spinning Department in the late 1930s where women spun asbestos fibre into yarn weaved into fire blankets for war ships, literally surrounded by clouds of fatal asbestos dust. He remembers them sometimes having 'snowball' fights with the dust that was everywhere, and no-one was wearing a mask. He was also part of the Home Guard so doing his bit for the war effort on top of working a full day in the factory.

In this case, Shaheen is pursuing a product liability claim against Cape because they manufactured Asbestolux sheets and the client was exposed to the dust. The claim is on the basis that Cape did not provide any warnings about the dangers of cutting and handling the Asbestolux sheets to end users.

Meanwhile, Mr Auger said he welcomed the new memorial: 'It's nice to see a statue going up for all those innocent people who died trying to earn a living, including my brother and my brother-in-law.

"Let's be honest, there are plenty of youngsters who don't know what asbestos is or what it means."

Peter Williams said that the Cape factory had 'an appalling and shameful legacy of corporate neglect the effects of which are still being felt today'.