In Waterrower (UK) Limited v Liking Limited (T/A Topium) [2022] EWHC 2084 (IPEC), the Intellectual Property and Enterprise Court (IPEC) rejected the defendant's application to strike out the claimant's claim for copyright infringement in its WaterRower resistance rowing machine on the basis that the rowing machine was not a "work of artistic craftsmanship" under section 4(1)(c) of the Copyright Designs and Patents Act 1988 (the CDPA).

The claimant UK company sells exercise equipment, including the 'WaterRower', a water resistance rowing machine, which was designed by a former US rower called John Duke.

Mr Duke had designed and built boats and had a 'life-long interest in various forms of art, crafting with wood and artistic design'. The claimant's pleadings indicated that Mr Duke had been inspired by various rowing equipment and furniture designers, the Arts and Crafts movement and Shaker furniture design. When designing the WaterRower, Mr Duke had wanted to 'recreate the sparce elegance of a Shaker design' and to create a rowing machine offering the user a 'welcoming emotional connection, as they would with a piece of art or furniture'.

The initial WaterRower was hand-made by Mr Duke and aspects of the modern-day version are still hand-made. The first hand-made rowing machine was presented at a boat show in 1987, after which his first orders were placed. Mr Duke had applied for a US patent which has now expired. There have been eight iterations of the WaterRower in four series, the first of which is shown below: 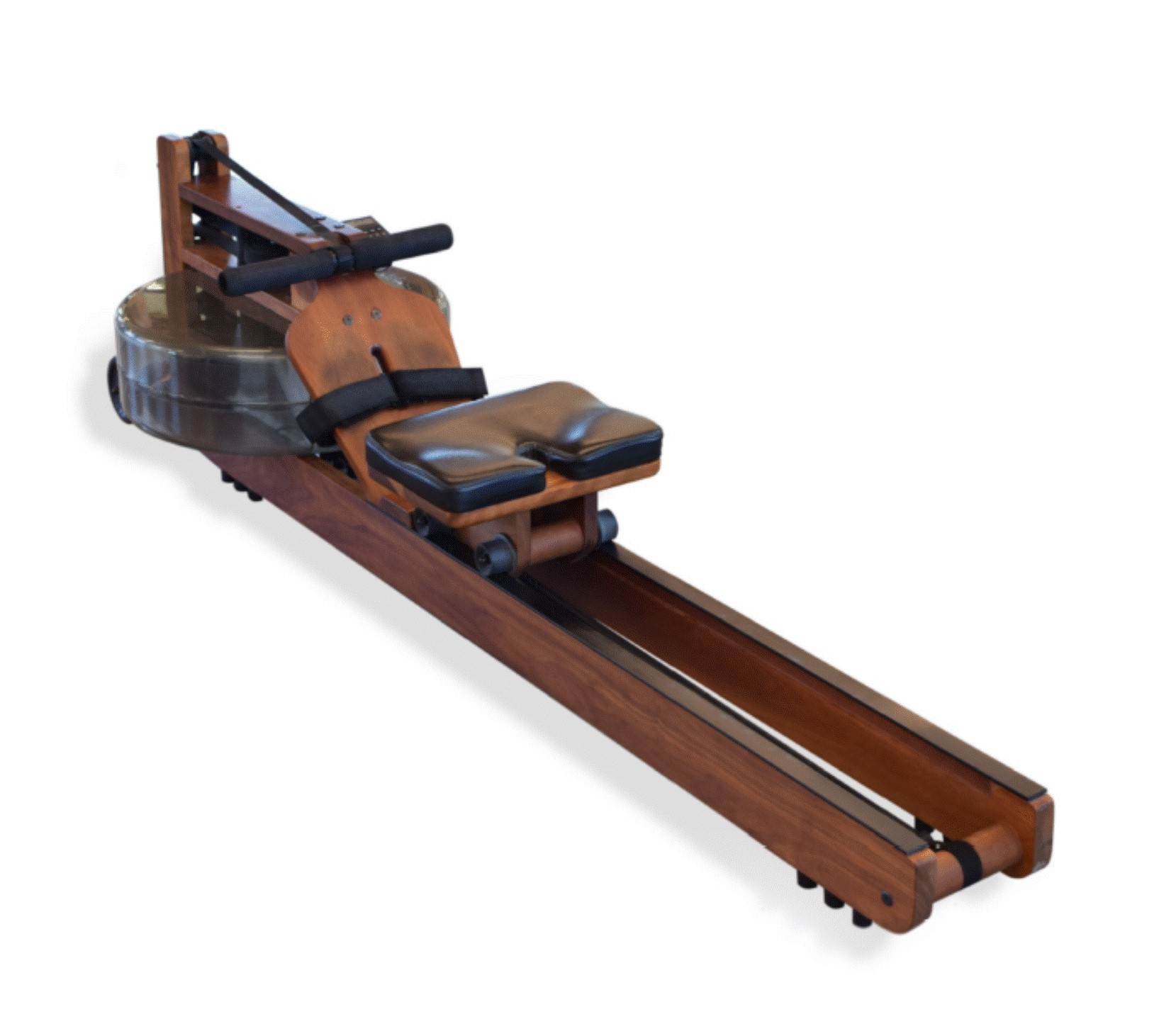 The WaterRower has been recognised as an 'iconic design' in both the US and the UK and is on display in the Design Museum in London. It has also featured in numerous publications, including publications by the Museum of Modern Art (MOMA), the Conran shop, design magazines (Architectural Digest and Galerie) and other magazines, newspapers and on television, including GQ, Men's Health, Playboy, Men's Fitness and House of Cards.

The defendant is a Hong Kong company which sold its TOPIUM water resistance rowing machine from at least November 2019 in the UK. Its TOPIUM Model 1 rowing machine was a replica of the eighth iteration of the WaterRower, which the defendant admitted copying, and sold on amazon.co.uk alongside the slogan, 'Beautiful enough as furniture': 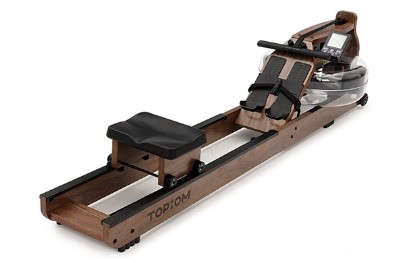 The defendant's strike out claim

The judge agreed with the defendant's counsel that there were several unresolved points of law to be ironed out:

(i)          Whether the use of closed categories of copyright works listed in the CDPA is permissible under EU law (as it subsisted at the time of the UK leaving the EU);
(ii)          Whether George Hensher Ltd v Restawile Upholstery (Lancs) Ltd [1976] AC 64, the leading House of Lords authority on 'works of artistic craftsmanship' conflicts with the two CJEU decisions in Cofemel v G-Star Raw (C-683/17) and SI v Chedech/Get2Get (Brompton) (C-833/18) (and see our blog here: CJEU gets a handle on whether copyright subsists in Brompton bicycle, but ultimate decision hinges on Belgian court); and
(iii)         Whether the recent IPEC decision in Response Clothing v Edinburgh Wooden Mill [2020] EWHC 148 (IPEC), which explored the above issues, was correctly decided (see our blog here: First Response: Copyright in UK designs – artistic quality no longer required?)

Section 4 of the CDPA sets out the categories of work which can qualify as an 'artistic work' under s.1(1)(a). An artistic work means:

However, Hensher was a controversial decision that has been discredited over the years, in particular by the judges in Lucasfilm v Ainsworth [2011] UKSC 1 AC 208 (the famous case about copyright in the Stormtrooper helmets in the Star Wars films) and Response Clothing both stating that "it was difficult to identify the true principle of the judgment…"

The judge in this case acknowledged that there is no exact helpful test or formula but re-visited the speeches of the five Law Lords in Hensher and, despite being reluctant to condense the speeches into any 'snappy definition of works of artistic craftsmanship', weeded out some key points:

The defendant's case was that on any view, the WaterRower was not artistic. The judge disagreed for three reasons:

The defendant had also placed much reliance on the functional aspects of the WaterRower and had cited an extract from Copinger and Skone James on Copyright (18th edition) which stated that 'the more constrained the designer is by functional considerations, the less likely the work is to be a work of artistic craftmanship.”

The judge again cited Lord Reid in Hensher who had said a work of artistic craftsmanship can still be useful and 'a level of functionality is no bar to a finding of artistic craftsmanship'. A helpful analogy of wrought iron gates was used – these are clearly useful and some aspects are of course dictated by function such as hinges, locks and the need to keep people/animals out. He accepted that many of the choices made by blacksmiths in crafting the gates would be functional, but there are also decorative elements that take it to that next level. The claimant's view was that the WaterRower was similar – functional yet artistic.

Overall, the judge did not conclude that the claimant had no real prospects of establishing that the WaterRower was a work of artistic craftsmanship under Hensher.

The defendant submitted that, in the UK, 'the law on artistic craftsmanship is set out in the binding House of Lords case of Hensher v Restawile' and the judge had made his finding based on that authority. However, the defendants had also argued that the rowing machine would not attract copyright protection under the principles set out in the CJEU cases of Cofemel and Brompton, which the judge felt necessary to address. As a reminder, the CJEU in Cofemel set out two cumulative requirements to qualify as a 'work': (i) the existence of an original object; and (ii) the expression of intellectual creation (of its author) i.e. the author has made free and creative choices in creating the work.

The ruling also confirmed that if the creation of a product has been dictated by technical considerations, rules or other constraints, which have left no room for creative freedom, that product cannot be considered to be original and therefore constitute a 'work'.

In Brompton, the case about the well-known folding bike, the CJEU ruled on whether copyright protection could apply to the shape of a product that was partly necessary to obtain a technical result. It concluded that functional shapes could, in principle, attract copyright protection provided they were original.

The judge acknowledged that there are inconsistencies between UK law (with its closed categories of what constitutes a copyright 'work') and EU law which need to be resolved at some stage, but that it was not necessary for the purposes of this case because the judge had already found that the claimant had a prospect of success under Hensher. However, he went on to give his view from an EU perspective concluding that the claimant would also have a real prospect of success under Cofemel/Brompton in that the WaterRower was both original and an expression of Mr Duke's intellectual creation.

The judge could not agree with the defendant's argument that the technical and other constraints facing Mr Duke (such as the runners, a padded seat, its need to be flat, footrests, pulleys, grooves etc) 'left no room for creative freedom….' The judge was satisfied that the evidence demonstrated that Mr Duke had worked within the various constraints for a water resistance rowing machine and yet 'was still able to exercise his own free and creative choices' to produce a WaterRower that reflected his personality. He highlighted Mr Duke's use and choice of wood which was 'clearly a creative choice', as well as shape, dimensions of various features, use of materials and the size and shape of the body of water and how it is contained.

The defendant had tried to use the US patent application against the claimant alleging that its existence meant the features of the rowing machine were technical. Whilst the judge agreed there were undoubtedly technical constraints, some of which were described in the patent application, it did not deal with 'how it's made'.

The defendant had also tried to rely on Response Clothing and the fact that it was wrongly decided. The judge touched on this only very briefly, having also acknowledged that it was not a binding decision on him anyway.

After a fairly detailed judgment re-visiting much of the conflicting law on 'works of artistic craftsmanship', we find ourselves no closer to any 'test or formula' as to its meaning and the 'unresolved points of law' highlighted by the defendant are yet to be resolved. The judge did not find that the WaterRower was in fact a work of artistic craftsmanship – that will be a matter for the Enterprise judge at trial.

We are none the wiser as to whether the closed categories of copyright works prescribed under the CDPA are compatible with EU law and because the judge concluded on the evidence before him that the claimant would have a reasonable prospect of success under both UK law and EU law, he did not need to address the apparent inconsistency. If the WaterRower had not had 'eye appeal', he may have needed to address the inconsistency because Hensher said it was necessary (and also that 'more' was needed e.g. perhaps the author's intention or recognition by others that it was artistic), whereas Cofemel said that eye appeal was not required as long as the work was original (in the sense that it was the author's own intellectual creation). Therefore we are still in the position where a work may be protected under EU law, but not under UK law.

It will be interesting to see whether, if this goes to a full trial, the judge attempts to address and resolve the EU/UK inconsistency. This is the second UK case (the first being Response Clothing) where the judge has managed to dodge reaching a conclusion on this and as the judge in this case acknowledged, the interaction between the CDPA and Cofemel/Brompton "would appear to need to be resolved at some stage, by Parliament or the higher courts”.

If the case were to eventually make its way to the Court of Appeal or the Supreme Court, the judges would no longer be bound by the retained EU case law (as the lower courts are) and could consider departing 'where it appears right to do so'. Some creators and practitioners are averse to allowing industrial designs the longer period of protection for copyright works (70 years plus life of author) rather than the shorter period provided under design law, so there may be some appetite for divergence.

We will be watching this area of law very closely going forward and will be sure to provide any updates as and when we can.