Well-known Spanish fashion retailer Zara unsuccessfully took action against an independent boutique based in Darlington, in the north east of England, before the UK Intellectual Property Office (UKIPO).

In a dispute that has been billed as a David v Goliath battle and which has received significant publicity in the national press, the Spanish fashion retailer took action against a Darlington boutique, House of Zana. According to press reports, Zara asked the boutique to re-brand, claiming that the boutique's name was confusingly similar to Zara's name and diluted the distinctiveness and reputation of the Zara brand. Zara's owners, Inditex filed an opposition with the UKIPO, alleging contravention of Sections 5(2)(b) and 5(3) of the Trade Marks Act 1994 (Act) (see full decision).

Ambri Kotrri started House of Zana online in 2018 as she explains on the boutique's website and in November 2019, she opened the boutique in Darlington as a concept store. The word "Zana" means "fairy" in Albania where the clothes are manufactured. The boutique also houses over 20 local emerging independent brands.
In December 2020, Ms Kotrri applied for a UK trade mark consisting of two in a series (application no. 3569173), in class 25 for clothing as shown below: 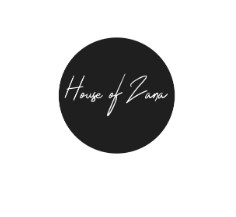 Section 5(2)(b) – Likelihood of confusion

Zara based its opposition on its prior UK trade mark registrations for the plain word mark ZARA. Zara argued that the goods covered by the respective marks in Class 25 were identical, and that the parties’ marks were highly similar (visually, aurally and conceptually), such that there was a likelihood that the average consumer would be confused as to the origin of the goods.

Although the Hearing Officer considered the parties' goods were identical and that the ZARA trade mark enjoyed enhanced distinctiveness in relation to clothing, the opposition was ultimately unsuccessful.

Zara put forward arguments that the "House of" element was descriptive and non-distinctive in relation to the goods in question (clothing) since it is a term commonly used by fashion houses and fashion retailers. Therefore the ZANA element was the dominant and distinctive element of the House of Zana Logo mark. Zara further contended that the words ZANA and ZARA  were visually similar because they contained the same 3 of 4 letters in the same order, with the lower case letters "r" and "n" being visually similar. However, the Hearing Officer found that the additional words “House of” at the beginning of the House of Zana Logo mark gave rise to a significant visual difference from the plain word ZARA. This meant that the marks were only similar to a low-medium degree.

The Hearing Officer considered that the ZARA and ZANA elements were only aurally similar to a low – medium degree, because the second syllable ("ra" v "na") had a different sound.

While Ms Kotrri included evidence and submissions regarding the meaning of the word ZANA ("fairy" in Albanian), this was considered largely irrelevant for the purposes of the average consumers who were UK consumers at large. The Hearing Officer found that the word ZANA would likely be perceived as meaningless by the average consumer, and as such was conceptually different to the reasonably well known female name ZARA. This was despite Zara's argument that the addition of the "House of" element was commonly used in the fashion industry alongside a name.

Although the Hearing Officer stressed that there were a number of notable factors in favour of Zara's claim, overall taking all of the relevant factors into account, including the overall impression of each mark, he found that there was no likelihood of confusion.

Success under section 5(3) does not require a likelihood that the consumer would be confused as to the origin of the goods. Instead, section 5(3) gives extended protection to a trade mark which has a reputation, which guards against use of a later mark that is sufficiently similar to call to mind the reputed mark in such a way that it would take unfair advantage of, or be detrimental to, the distinctive character or the repute of the earlier mark.

Ms Kotrri conceded that the ZARA trade mark had a reputation in relation to clothing and retail services and The Hearing Officer agreed that "the necessary reputation is therefore not in issue; it is known by a significant part of the relevant public".  However, he found that any mental link that consumers would make between the ZARA and House of Zara Logo marks was too insubstantial and fleeting to cause any detriment to Zara.

The opposition decision can be appealed to either the appointed person or the High Court.

It will be interesting to see whether Zara decides to appeal, particularly given the wider media interest surrounding the matter and the negative publicity which could be associated with an appeal. However, the Hearing Officer's findings in relation to visual, aural and conceptual similarity and the associated likelihood of confusion may give Zara grounds to consider an appeal.