How “Safe Harbor” applies to a foreign partnership on Indirect Transfer of Property?

A foreign partnership, without an establishment in China, and its overseas property transfers shall not be subject to Chinese tax in general.

However, an indirect transfer shall be re-characterised as a direct transfer of China Taxable Property[1], and subject to Chinese tax. The latter would only apply provided that the transfer is conducted by a foreign partnership (through arrangements that lack reasonable commercial purposes), and the said foreign partnership avoids Enterprise Income Tax (“EIT”) – hence, liability through the means of the transfer[2].

Under the same announcement above, there are three type of transactions which would be exempt from the income from the indirect transfer, under certain conditions: Intra-group Re-organization; Public Securities Market Transaction; and Applicable Tax Treaties.

After the transaction, G claimed that the income generated from the indirect transfer of its assets, by non-resident enterprises, shall not be subject to the enterprise income tax in China as based on self-examination, Article 5(2) of Announcement No.7, where such may apply to this transaction. If the latter applies, G shall be exempt from the Enterprises Income Tax (EIT), purporting to this transaction. 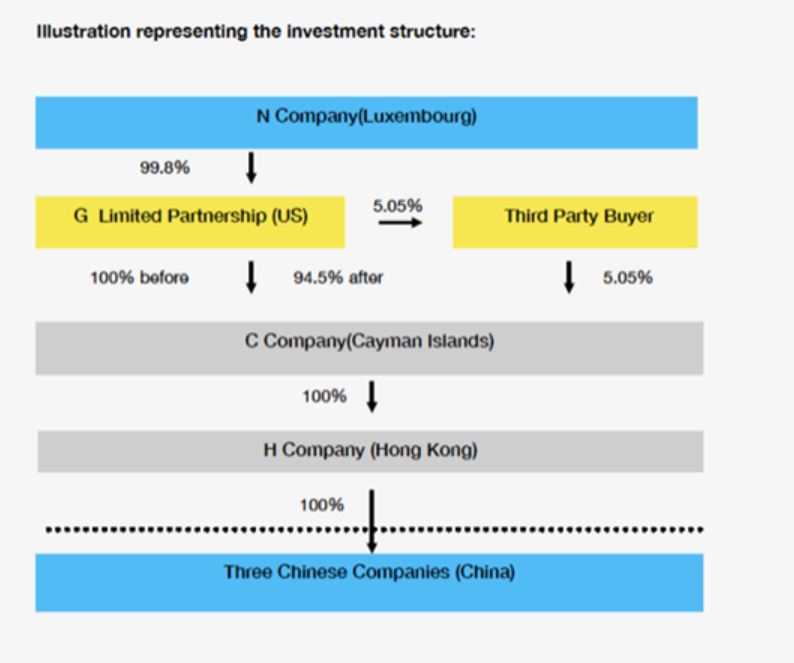 Whether the income generated from the transaction between G and the third party could be exempt from EIT, in China, by applying one of the “Safe Harbour” rules under Announcement No.7 - which states the circumstances under which a non-resident enterprise, which holds and transfers its China Taxable Property (according to the applicable tax treaty), and the income generated from the said transaction would be exempt from EIT, in China.

The in-charge tax authorities did not grant G’s application as the tax authorities determined that the “Safe Harbour” rule under Article 5(2) of Announcement No.7 does not apply to this case. Such was due to the fact that the transaction fell short of the conditions imposed by the tax treaties, for two reasons: (1) G is not a US resident for tax purposes, therefore the US-China tax treaty does not apply; and (2) G was registered in the United States, and was not a resident in Luxemburg, therefore, there are no special provisions to address the “pass through” issue in the tax treaty between China and Luxemburg, which does not apply to this transaction either.

Under the law in China, unless otherwise stipulated by tax treaties, the income of the foreign partnership (which is taxable in China), may be entitled to a claim through the tax treaty benefits - such would be possible only when the foreign partnership is a resident of the other Contracting State. In other words, in this case, G (as a partnership) is unable to claim the tax treaty benefits, provided that it does not subject itself to pay tax under the domestic law in the United States.

Form 1065[4] shows that G is a domestic limited partnership registered in the United States. According to 26 U.S. Code § 701, “A partnership as such shall not be subject to the income tax imposed by this chapter. Persons carrying on business as partners shall be liable for income tax only in their separate or individual capacities.” Thus, in this case, G (as a partnership), is not a US resident for tax purposes.

The US-China tax treaty provisions do not stipulate that if, under the domestic law of the other Contracting State, the income derived by the partnership is deemed as income of the partner, then the partner may be entitled to claim tax treaty benefits - with respect to the part of the income which it drives from the partnership.

Hence, since G is not a US resident for tax purposes, no special rule can be applied here, either. The tax treaty benefits under Article 5(2) of Announcement No. 11[5] do not apply.

From the Luxemburg tax law perspective

N was a limited partner of G - which was holding and transferred the shares of three Chinese resident companies to the third party, indirectly. The tax treaty between China and Luxemburg does not apply to the income generated from this transaction, where G is the equity transferor.

Therefore, both G and N were unable to claim tax treaty benefits based on Article 5(2) of Announcement No.7.

How to prove the foreign partnership’s identity from a tax perspective?

In practice, one of the key issues is proving the foreign partnership’s tax identity.

The Tax Resident Certificate submitted by the partnership (which is issued by the tax authority of the other Contracting State), shall be able to prove that the partnership (under the laws of the other Contracting State), is liable to tax therein by reason of his domicile, residence, place of incorporation, place of management, or any other criterion of similar nature[6].

What is the resulting tax consequence once the “Safe Harbour” rule, under Article 5 of Announcement No. 7, does not apply?

One open question, that is likely to be debated, is whether the elements of “Safe Harbour” would still be of relevance when assessing reasonable commercial purpose.

What’s the withholding obligation for offshore buyers and sellers?

The key issue is that offshore buyers and sellers, in most instances, are unable or not in a position to determine whether the indirect transfer is taxable in China - especially within the time limits imposed, and when the tax authority has no obligation to make a decision on the related taxability.

Should the parties involved in the indirect transfer report the transaction to the in-charge tax authority?

Therefore, the policy for both offshore buyers and sellers of an indirect transfer, and the underlying Chinese enterprises, may (although, not mandatory) voluntarily report the transfer by submitting a standard set of documents to the in-charge tax authority. Such is bound to make the process a more “friendly” one for all of the parties involved.

For instance, if the offshore buyer reports the transaction within 30 days from the date when the equity transfer contract/agreement, has been signed, then a potential exemption from/or a reduction in future penalties for any failure to properly fulfill the withholding obligation on the transfer may be secured.

However, it empowers the in-charge tax authorities to request various documents from the buyer and the seller of an indirect transfer, as well as from the underlying Chinese resident enterprises. The documents subject to request have a broad and unclear coverage, and include all decision-making and “implementation processes” information, for the whole arrangement relating to the indirect transfer.

Announcement No.7 has a significant impact on cross-border transactions and intra-group re-organisations involving China. The disputes concerning the indirect transfer of equity interests in Chinese resident enterprises have become a major issue in the recent years.

In practice, it is a tough decision to make for offshore buyers and sellers with their indirect transaction overseas - especially considering the fact that the in-charge tax authority has no obligation to issue a formal decision on the taxability of the transaction.

When the in-charge tax authority assesses tax liability, they tend to consider various determining factors when doing such, especially as cross-border and domestic tax law will often be involved. Hence, it is important to get international tax professionals’ assistance on the disputes/issues, to access their tax liability knowledge, in order to ensure that one is fully in compliance with the applicable laws.

* Special thanks to Ms. Bianca-Maria Durac who has helped by proofreading this article.

Please kindly note that this article does not constitute, nor shall it be considered to be legal advice in any way, it may be subject to change if the law has been issued, revised and/or abolished.

[2] See Announcement of the State Administration of Taxation on Several Issues of Enterprise Income Tax on Income Generating from Indirect Transfers of Property by Non-resident Enterprises (SAT Announcement [2015] No.7, effective date: 3 Feburary 2015)) (“Announcement No.7”)

[4] See https://www.irs.gov/instructions/i1065 (latest visit on 26 May 2021) Form 1065 is an information return used to report the income, gains, losses, deductions, credits, and other information from the operation of a partnership. A partnership doesn't pay tax on its income but passes through any profits or losses to its partners. Partners must include partnership items on their tax or information returns.  However, one exception may be worth to point out which is, in the US Tax Code, the so-called “check the box” rule.  It permits a US taxpayer to choose whether an entity is to be regarded as transparent or not for US tax purposes, regardless of the actuality. If the partnership choose to be regarded as opaquer for US tax purposes when it files its tax return. G’s tax identity may have impact on this tax treatment.

[5] Announcement [2018] No. 11 refers to Announcement of the State Administration of Taxation on Several Issues Concerning the Implementation of Tax Treaties, effective date: 9 February 2018