Andrew Morgan
Action Mesothelioma Day, Merseyside remembered those who have died from the disease with A Spirit of Hope dove release at St Nicholas’s Parish Church Garden.

Speakers at the event included Professor Judy Coulson from the University of Liverpool discussing her laboratory’s Hen’s Egg project, researching new treatments in finding a cure for mesothelioma, and nurse Alison Hassall from the Clatterbridge Cancer Centre who reported on the latest trials for mesothelioma including immunotherapy and Nivolumab. 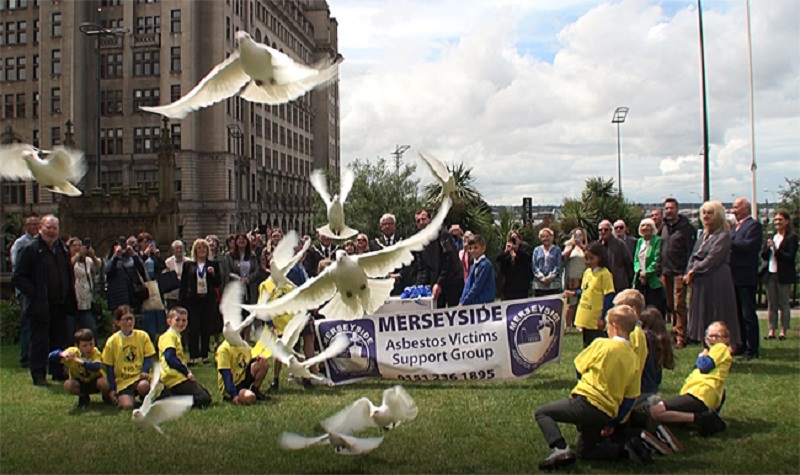 She said: 'The Mesothelioma and Radical Surgery  (MARS 2) study had not yet been reported as follow up had been extended. BEAT MESO are looking at chemotherapy plus Mono clonal anti body with or without Immunotherapy which has recently closed for recruitment as the target had been met. Patients are still having ongoing treatment and it will be interesting to see the outcome of both studies.”

The Mayor of Wirral Councillor Jeff Green highlighted that more than 2,500 people die from mesothelioma every year in Britain because of exposure to asbestos.

He said: 'Asbestos exposure also counts for approximately 2500 deaths from Asbestos related lung cancer and while the deadly material has been banned in the UK since 1999, it still lurks in at least half a million buildings constructed before that year, posing huge risks to anyone who comes into contact with it.'

Kim Johnson MP for Liverpool Riverside raised concern about the closure of the Barrow in Furness DWP office that supports people suffering from mesothelioma. 'The Barrow office is one of the many DWP specialist advice centres which has provided expertise with experienced staff in fast tracking claims for people with these insidious diseases', she said.

'People on Merseyside are still suffering the dire legacy of our industrial past with many factories and the local shipbuilding industry having used asbestos for decades before it was banned only in 1999.

'This is not a disease of the past as there are over 5,000 deaths per year from the deadly dust. I call on the government to think again about their plans to close DWP offices and in particular Barrow as well as Toxteth and St John's in my Liverpool Riverside constituency.'