Baby Loss Awareness Week 2021: 'Midwives treated me as if I were back at school'

The 19-year-old mother of a baby girl who died following mistakes at Tunbridge Wells Hospital has criticised the way she was treated by midwives during her labour and birth of her daughter Rosanna.

Rosanna Matthews was born in November 2020 in poor state following delays in delivering her and she sadly died four days later. A post mortem listed her death as due to hypoxic-ischaemic encephalopathy and congenital pneumonia and multiple placenta pathology.

Her mother, Elena, who contracted sepsis during the labour, has raised serious concerns that midwives did not listen to her when she was in extreme pain and made her feel like a nuisance. 'It was like being back at school', she said.

At a meeting with the hospital trust, Elena also said that being told to 'calm down' because I was 'stressing out my baby' while in the midst of sepsis infection and terrible pain took a terrible toll on her ability to bond with Rosanna in the ICU before she passed away.

'I felt too guilty to hold her,' Elena said. 'I was made to feel that it was my fault that she'd been born so poorly when of course the reality was that she was in distress and should have been delivered earlier.'

Mark Bowman is currently investigating a medical negligence claim on behalf of Rosanna's parents, Elena and David. An independent HSIB report highlights failure to escalate monitoring following Elena being clear she had strong urges to push (and being told not to), failing to recognise the trace was abnormal following a long deceleration and failing to call the obstetrician once the CTG trace was abnormal.

The trust apologised to Elena for inappropriate communication used by midwives and promised to include it in future learning initiatives.

Mark said: 'Too many of our tragic baby loss cases centre on maternity staff's inability to react appropriately to clear signs that a baby is in distress. We have huge respect for NHS maternity care and support the lobby for better funding, but these services must get basic care right to prevent the loss of more babies.' 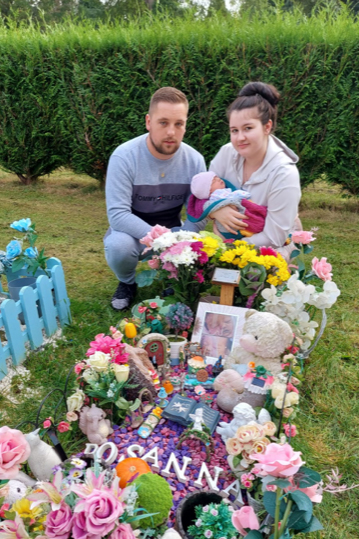 Meanwhile, Elena and David welcomed their new baby daughter Lola last month. Elena said that she was advised that having another baby quickly after suffering the loss of a baby helped with the grief.